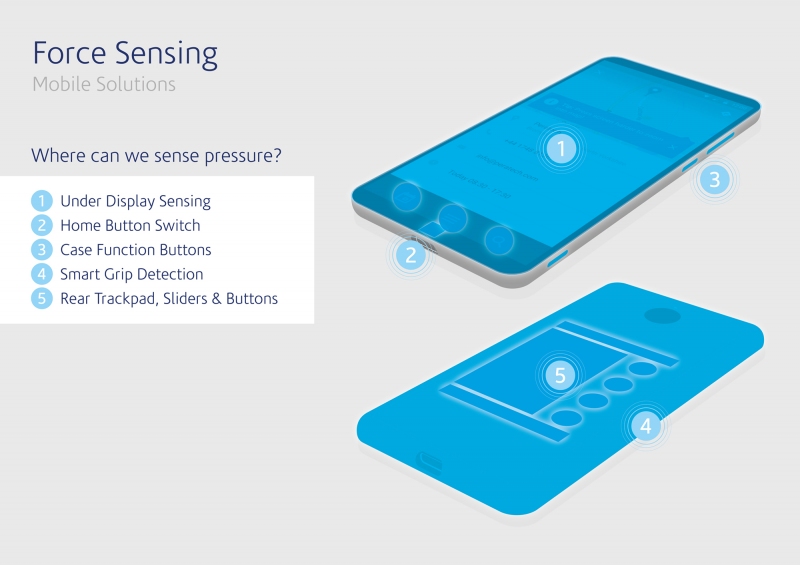 Peratech, a world leader in force-sensing technology, is aiming to give users of smartphones and tablets a more intuitive user experience.

Richmond, Yorkshire, UK – 20 October, 2016. Peratech, a world leader in force-sensing technology, is aiming to give users of smartphones and tablets a more intuitive user experience while unleashing more creative opportunities for product and app developers by adding new ways for consumers to interact with their devices.

The most recent forecasts indicate that shipments of smartphones will exceed 1.5 billion units in 2016 with tablet shipments expected to reach at least 240 million. Peratech is working with several well-known manufacturers of these devices to add QTC force sensors to multiple surfaces on their products. The sensors, which are supplied in the form of a polymer membrane as thin as 50 µm, can be applied under displays, along the edges and on the backs of handheld consumer electronic devices. They can be configured to sense X-Y position through touch and applied force in the Z-axis. There are single-touch and multi-touch versions.

Sensors used under a display can sense the force applied across the entire screen and compute the touch pressure for individual zones or functions. Alternatively, they can provide discrete pressure buttons in regions that match the graphical user interface layout. Home buttons can be made multi-functional and wear-prone dome switches replaced with a force-sensing button where a light touch of the finger gives a quick wake up to check the time or messages and a firmer press reads the fingerprint and unlocks the phone.

QTC sensors work under most surfaces. When applied to the sides and/or back of a smartphone, they sense the user’s grip and the amount of pressure applied, which can be used to control basic functions or apps. In addition, the back of a smartphone or tablet can be configured as a single- or multi-zone touch pad, opening up many more options for gaming input and interaction. On the device edges, QTC sensors may be used as switches and volume or brightness controls. Here, cutting holes in the case is eliminated and it’s easier to make products more robust and waterproof.

Peratech CEO, Jon Stark, commented, “Adding a third dimension – force – to the user interface of a smartphone or tablet, and being able to do that anywhere on the surface of the device, offers designers infinitely greater opportunity to differentiate their products. They can become more creative with the interactions they provide, as can app developers, while at the same time making devices more intuitive and responsive”.

Based on patented Quantum Tunnelling Composite (QTC®) technology, Peratech’s force sensors bring a new dimension to tactile, or force-touch controls. QTC materials change from being an almost perfect insulator to becoming increasingly conductive in proportion to the amount of force applied to them. The materials are very robust and resilient, so that changes in resistance due to even the slightest pressure are both predictable and repeatable over more than a million cycles.

For designers of human machine interfaces (HMI), QTC technology offers unrivalled creative freedom and opportunities for product differentiation in both ergonomics and aesthetics. It makes touch buttons, panels and displays far easier to use.

Peratech’s award-winning, thin and flexible QTC sensors come in single-point, 3D single-touch, and 3D multi-touch versions. They can be used above, below or around rigid or flexible displays, or under metal, plastic, wood, or glass surfaces. The QTC touch experience is intuitive, consistent, precise, durable and reliable, whatever the environment, even when using gloved fingers or in the presence of moisture.

The diverse applications for QTC force sensors include consumer and automotive electronics, smart home systems and appliances, and industrial controls. Over a million devices around the world now employ the technology. Peratech’s custom design and integration service minimises both cost and time-to-market. The company also offers a range of standard products. Peratech Holdco Ltd. is a privately held company based in Richmond, Yorkshire, UK.

Quantum Tunnelling Composite and QTC are registered trademarks of Peratech Holdco Ltd. All other trademarks are the property of their respective owners.