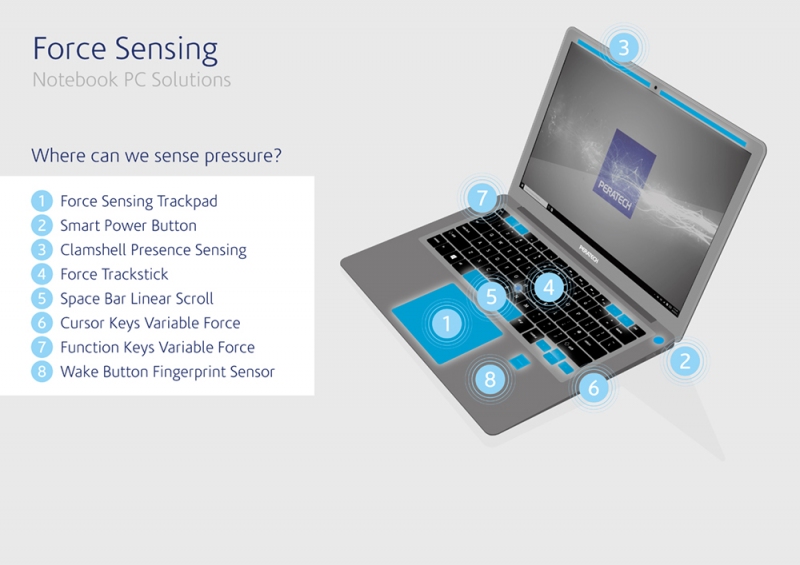 Richmond, Yorkshire, UK – 27 October, 2016. Peratech, a world leader in force-sensing technology, announces that it is collaborating with several leading notebook manufacturers to incorporate 3D force-sensing technology. The aim is to create a compelling new user experience through intuitive, multi-function interfaces that adapt to the user. In its Q4/2015 forecast, Gartner predicted a return to growth for the PC market this year with shipments of 287 million units being forecast. Innovation will be a key driver of this growth, with improved user interfaces and more flexible form factors as incentives for customers to replace bulkier and less intuitive older models.

Peratech is now customising its QTC force sensors to meet the requirements of the next generation of notebook PCs. QTC sensors, which consist of nanoparticles printed and encapsulated in ultrathin (down to 50 µm) polymer membranes, can be configured to sense an X-Y position when touched lightly and measure the force in the Z-axis as more pressure is applied. The response to pressure is predictable, repeatable and consistent over time. As a result, QTC force sensors offer the design flexibility required to create optimal interfaces in response to evolving user demands.

In trackpads, single point force sensors are a cost effective means for enabling a variable force input, with X-Y positioning still provided by capacitive sensing and tactile response from a microswitch or dome. Alternatively, integrating a 3D multi-touch force-sensing matrix into the trackpad delivers position and pressure data for every individual touch point.

QTC force sensors can be used under the space bar to create a linear scrolling function while providing X-position data. Cursor keys can be made more versatile, with changes in pressure being used to vary both scrolling speed and cursor speed. A similar approach is possible with function keys. By installing force sensors beneath them, volume and brightness can be pressure-controlled. The adjustment speed is improved by pressing gently to increase or decrease slowly, and pressing harder to adjust more quickly.

The power button can be made smarter too. For example, a light touch could put a notebook to sleep while a hard press powers it off. Similarly, a QTC sensor can be placed below a fingerprint sensor so that the computer can wake from a press of the button before the scan takes place. This means that the user only has to press one button, rather than two, to wake up a notebook.

Peratech’s Chief Commercial Officer, Mike Levin, said, “Every time we meet with designers and engineers, creative new ways for user interaction come into the conversation. Force sensing can be implemented at low cost, with minimal mechanical issues because the sensors are extremely thin and work underneath most surfaces. QTC sensors can not only be integrated as a primary touch interface, but can also improve the user experience when combined with complementary technologies such as capacitive sensing.”

Based on patented Quantum Tunnelling Composite (QTC®) technology, Peratech’s force sensors bring a new dimension to tactile, or force-touch controls. QTC materials change from being an almost perfect insulator to becoming increasingly conductive in proportion to the amount of force applied to them. The materials are very robust and resilient, so that changes in resistance due to even the slightest pressure are both predictable and repeatable over more than a million cycles.

For designers of human machine interfaces (HMI), QTC technology offers unrivalled creative freedom and opportunities for product differentiation in both ergonomics and aesthetics. It makes touch buttons, panels and displays far easier to use.

Peratech’s award-winning, thin and flexible QTC sensors come in single-point, 3D single-touch, and 3D multi-touch versions. They can be used above, below or around rigid or flexible displays, or under metal, plastic, wood, or glass surfaces. The QTC touch experience is intuitive, consistent, precise, durable and reliable, whatever the environment, even when using gloved fingers or in the presence of moisture.

The diverse applications for QTC force sensors include consumer and automotive electronics, smart home systems and appliances, and industrial controls. Over a million devices around the world now employ the technology. Peratech’s custom design and integration service minimises both cost and time-to-market. The company also offers a range of standard products. Peratech Holdco Ltd. is a privately held company based in Richmond, Yorkshire, UK.

Quantum Tunnelling Composite and QTC are registered trademarks of Peratech Holdco Ltd. All other trademarks are the property of their respective owners.