Why is force sensing safer and more convenient than capacitive touch in vehicles? 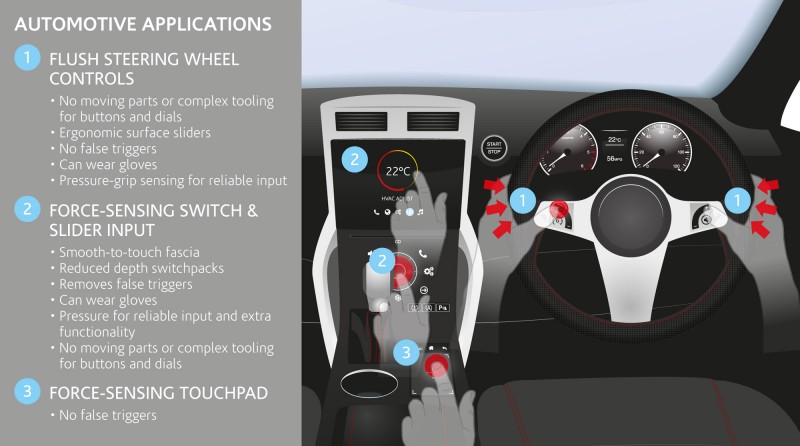 If you are driving a mid-range or luxury car these days, chances are you have a touch screen in the dashboard that allows you to control a significant number of the vehicle functions, especially the audio system, telephone and satellite navigation. These screens have proliferated in recent years, as they fulfil the dual function of acting as a display and a human machine interface (HMI), where the driver can control the infotainment system without requiring a huge and complex bank of mechanical switches that are fiddly to use and prone to failure.

The screens and interfaces in our cars use capacitive touch technology, in common with most of the touch screens we use these days, such as those at ATMs or check-in kiosks at airports. The capacitive touch technology in these screens relies on sensing a (finger) touch through the increase of the capacitance of the node caused by the presence of a finger or other conductive object in the proximity of the screen. The screens have multiple horizontal and vertical stripes of invisible conductive material so that the position of a touch can be ascertained and used to create a menu input.

Despite their wide deployment, capacitive touch screens do have several drawbacks – many of which become more problematic in the automotive environment. Most significantly, there is absolutely no tactile feedback to confirm correct operation, requiring the driver to look at the screen for confirmation, diverting their eyes from the road.

The second significant issue is unintended operation of the screen. In a moving vehicle, especially on a bumpy road, the driver may steady their hand near the screen – and this can be enough to cause an unwanted input. Bumps in the road or other vehicle movement can easily cause the driver to press the wrong menu option, leading to prolonged distraction while the inadvertent input is undone.

Another approach that provides an effective HMI for automotive use, without the drawbacks of capacitive technology, is force sensing. This uses a material where the electrical resistance changes with applied force, known as Quantum Tunnelling Composite or QTC®, invented and developed in the UK by Peratech.

As force sensing requires a definite input, there is no issue with inadvertent pressing creating an undesired input. This approach also provides the all-important tactile feedback, allowing the driver to keep their eyes on the road ahead. An added benefit is that a person wearing gloves can operate it, which is not the case with standard capacitive technology.

QTC technology is incorporated into a number of standard force sensors that are used either to provide pure force sensing as single-point sensors, or for simultaneously providing force and positional (X-Y) sensing using a dot-matrix type arrangement, sometimes known as a ‘3D’ sensor.

Off-the-shelf single-point sensors are offered with either 5 mm or 10 mm diameter active areas, along with matrix force sensors in several standard sizes. These sensors are sensitive enough to be embedded under various surfaces, including plastic, metal and glass, and behind flexible displays. Furthermore, the flexible sensor substrate allows them to be deployed in many curved surface applications. Peratech also supports custom designs for different touch button or array configurations, and QTC technology is capable of being integrated directly into many existing or new electronic system designs, including automotive interiors.

Peratech has written a detailed white paper discussing QTC technology and its applications in the world of automotive. To download your free copy, please click here.